At the beginning of this year we gave a donation to therapeutic community Comunita Brezzano in Tuscany for the purchase of tractor parts.

In the picture on the left you can see Boris with the new grader. There is always lots of work to do! To support him and Maria Meier (who leads the community) we did organize work weeks in Italy in 2013 and 2014.

What do we do during a work week?


With a small group of volunteers we are staying in Casa Shalom, that is one of the houses within the community. During this week we all work hard... we cut and stack the wood supply for the winter, we help with other chores, we clean and repair where needed.

So, we expect that you know how to use your hands and strength. In the evenings we have Bible studies, we make music, we sit around a camp fire and enjoy the peace We also take time to go to the beach!

Are you ready to leave your daily routine behind and would you love to help the people in Comunita Brezzano? Please, contact us by sending an email to janandmarja@gmail.com.

Cost for the week is 250 euro per person + travel (you either drive, or fly to Pisa where we will pick you up).

This year we have planned the work week from Wednesday August 26 to Wednesday September 2nd.

Don't wait too long to sign up, we have limited space available.

A few weeks ago a team of volunteers from 222Ministries, Pearl of Persia and Traveling Light visited the Syrian-Kurdish refugee camp in Suruc, Turkey.

The goal of Operation Love Splash was to share Gods love with people in need! We will show some photo's on this blog [click on the pictures to enlarge] as well as some comments made by team members and people in the camp...

"... the great music parade throughout the camp. This was to invite people for the meeting, it was fantastic... all men, women and children came out of their tents and followed us and the music. I saw it as an immense army of peace... "

The team had all kinds of fun, creative activities prepared in the smaller tent where the women and children could join in. In the big tent there was music, story telling and showing of Bible movies... which everyone loved!

"It was so awesome to see that also the men rejoiced and clapped their hands and walked with us..."

During a cross stitch project many women made emblems for the freedom fighters in Kobani. The teenage girls loved to make their own jewelry. At the end of the week everyone in that particular camp was invited to write their experiences on a piece of paper.

"Many people told us about trauma's and endless family tragedies because of IS... some could even come to forgiveness. We also prayed for people with diabetes, deaf- and muteness, handicaps and all kind of diseases."

Thanks to your donations we were able to purchase a beamer, sound system, speakers, microphones and arts & crafts materials. We left everything in the camp in the hope and trust that more volunteer teams will come and go.

There is so much more to share, but this blog is not the best place to do so. One thing is very clear though: our light shines brightest in the deepest darkness!

Maybe it is best to capture the whole operation in the words of one of the mothers in the camp (translated):

"This was the most beautiful week in my entire life.
Thank you for coming!"

Do you remember project sewage treatment plant for the rehabilitation and crisis home of Teen Challenge in Winiarczykowka, Poland? Yes, the center with that awesome name :)

Last year we were able to send them a donation towards this project. It requires quite some work and money to dig up the old septic tank and to install the new treatment system. A few weeks ago we were in Poland and we spoke with Janusz and Bogusia Gornicki about the progress of this project that is still pending. 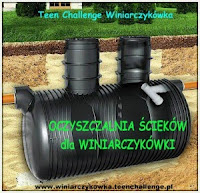 There are various reasons why this project has not been finished yet and why the money is still parked. The main reason is the fact that the total amount needed for this project has not come in and the contractor wants to make sure he is getting paid (well, can't blame him).

Another reason is that this past winter the ministry vehicle broke down and could no longer be repaired. Janusz and Bogusia had to start another fundraiser in order to collect money for the purchase of another vehicle... a big expense that is.

As in most crisis and rehabilitation homes that depend on donations, there is always something new crying for attention and funds. The center currently has no vehicle. Some of the residents can get around on bicycles, but others are disabled or up in age. So, they really have a big need for a good van! So, their efforts have been geared towards raising funds for this.

They furthermore have been working on enlarging their vegetable garden, it is 4 times as big now! With consumer prices on the rise, it is good that they can grow even more of their own vegetables! Although this garden project was sponsored by another donor, it also took extra time and energy to get everything done.

In the meantime a start has been made with the digging and excavation work in the full assurance that all necessary funds towards this project will come in. Traveling Light wants to be an encouragement by helping them again... so phase 2 it is :) They will need at least another 4,000 euro to finish this project.

If you want to join us in helping them, please send your gift to:
St. Traveling Light, Papendrecht
IBAN: NL91RABO0118582275
BIC: RABONL2U
Make sure to mention WINIARCZYKOWKA. With your gift you are sending hope and sharing love to the downcast, poor, addicted and lonely people of this world.

Let your light shine! That is the motto of Traveling Light. In the previous weeks we were able to do exactly so, and well: among Muslims in a Syrian refugee camp (a blog post will follow soon) and for the Jewish community in the streets of Berlin, Germany.

Together with volunteers/supporters Jim & Lynda Hayes we visited the Bethel House of Prayer in Berlin where we prayed for Israel, Germany and Europe. We asked forgiveness for upcoming anti-Semitism, we prayed for reconciliation between Germans and Jewish people and we came against the spirit behind neo-Nazism.

That same day we were walking through the Klopstockstraße in the Hansaviertel in Berlin and we stopped to take a closer look at some bronze name plaques that were embedded in the sidewalk. The bronze plaques carry the names of Jewish people who used to live in that street and who were killed during the Holocaust.

While we were standing there we got to talk with a couple who explained to us that these plaques are so called Stolpersteine, or stumblng blocks.... a project of artist Gunter Demnig.

Throughout Germany there are thousands of these Stolpersteine. They are being sponsored by individuals, family members of Holocaust victims, schools, churches, organizations etc. The lady told us that she happened to be the one taking initiative for the Stolpersteine in this street.

Our meeting was certainly no coincidence! How awesome that at that moment we were able to add substance to our prayers from that morning (after all: faith without actions is dead): we promised to sponsor SEVEN Stolpersteine.

In the meantime we have received the names of the seven victims: the Lehrhaupt family, the Liebmann family, young Ursel Thomaschewsky and little Ralf Rewald who was only fourteen years old when he was picked up all alone and deported to Auschwitz.

Right there, in the middle of the street, we prayed with this German lady and her Jewish friend from Israel and blessed them with peace, joy and health.

With the sponsoring of these 7 Stolpersteine we want to remember the Holocaust victims and to emphasize the reconciliation message of Jesus Christ (Yeshua ha Mesiach). In Him all nations can find peace!

Arise, shine, for your light has come, and the glory of the Lord rises upon you (Isaiah 60:1)