On this blog we often write about projects and programs, but ultimately it is always about people. The people behind the projects. The people in the programs. The people of the initiatives and ideas. The people we want to encourage.

We try as much as possible to build good relationships with them ... As a matter of fact, every project is essentially the beginning or the continuation of a friendship!

Sometimes we do not have to travel far to maintain those relationships, sometimes we just meet each other on Dutch soil :) This happened several times in recent months ...

In October we had an inspiring meeting with Miki & Suzana Kamberovic from Serbia. They are the leaders of a Roma church and school. We talked, shared ideas, prayed together and agreed to help them with a winter project. We donated a portion of the proceeds of the winter fair for the purchase of a good heater in their new kids' club.

A few weeks later we had a pleasant meeting with Boris and Jelena Strbac, also from Serbia. They are the founders of Restart, a non-profit organization dedicated to reach addicts and the homeless. They were in the Netherlands to attend a church conference and drove all the way in the beautiful Citroën they purchased with the help of Traveling Light.

We asked them about their greatest joy, their biggest frustration and their most difficult challenge. That lead to a very interesting conversation. At the end of the evening we prayed together in the Citroën!

Janet van Boxtel (Embrace) from Hungary was also in the Netherlands for a few days. We went to her ministry presentation in Wemeldinge. She told about the work among the homeless and poor in Hungary and also about the difficult, but beautiful contacts with the many refugees.

We prayed together, we laughed and talked. We could tell that spending some time with her Dutch friends and supporters encouraged her. On December 23rd they organized a meal for 300 homeless people in Hungary. A very special event!

Last week we drove to Aachen (well, that is Germany, but close to the Netherlands alright) for a meeting with Maria Meier from Comunita Brezzano in Italy. We have known Maria for some years now. She leads a therapeutic residential community in Tuscany. In 2013 and 2014 we organized a work week in Tuscany with a group of youngsters from our church.

At the beginning of 2016 you will see Maria again on this blog. We will help her to fundraise for roof repairs on one of the old Tuscan houses.

Meeting up with people, inspiring and encouraging them ... perhaps the most important aspects of the work of Traveling Light, even more so than the money we obtain through fundraising.

There are many small-scale initiatives (read: charities) all over Europe. From time to time the people running those programs and non-profits feel somewhat alone in their struggles. That is exactly why, in addition to offering financial support, we invest in friendships.

Back in June 2014 we presented project Teen Challenge Tbilisi, Georgia on this blog. We then raised 2,200 euros which was needed to employ graduate Giorgi as a worker in the Teen Challenge rehabilitation center.

Giorgi went through the Teen Challenge program (after having spent many years in addiction) and during that time he made the decision to give his life to Jesus.

Our donation was enough for Teen Challenge to employ him for eighteen months. Let's take a look and see how Giorgi is doing....

Last July we visited Georgia. Our visit included also a day out with Giorgi and his fiancée Olya. He showed us beautiful places in the country. We also saw how he helped and guided the men in the center and we were surprised by his musical talents ... he turns out to be a talented worship leader as well.

In September he married Olya. He no longer lives in the center, but in a house close by. Together with Teen Challenge staff member Madina his wife runs a local grocery shop that Teen Challenge has opened recently. It is a wonderful place for meetings and conversations with local residents.

It is so nice to see someone grow and prosper and develop the ability to help and inspire other men who come into the program, such as Asen and Edik ... (see picture below).

Traveling Light wants to help Teen Challenge Georgia in keeping workers such as Giorgi. The program depends on donations which is a challenge from day to day, but always exciting. We are delighted to see and hear how people's lives change ... because every life counts!

If you enjoy hearing personal and positive news from a far away country, make sure you become a contributor. When you do so, your heart will follow your investment and you will become more involved. We welcome your gifts!

THANKS in advance for your support.

We wish you all a blessed Christmas season.

We can look back at a very successful winter fair. A tremendous amount of work was done by our team of faithful volunteers ... everything looked really beautiful and so welcoming.

We furthermore had a table full of homemade pies and cakes. Many dear friends and family members donated these goodies for our bake sale.

There was hot chocolate, pea soup, glühwein, tea and coffee, a stall with beautiful cards and much more. The Wii snowboarding game caused a lot of excitement and hilarity in our makeshift ski hut and at the end of the afternoon we were able to count a little over 1,400 euros! What a fantastic outcome.

1.000 euros of this will go to the work of Miki & Suzana Kamberovic in Serbia. We met them last summer during the Roma conference in Skopje and in October they were in the Netherlands. We came together for an inspiring evening and talked at length about their work and vision for the Roma people in Serbia.

Miki and Suzana live with their children in the Roma center OAZA in Jagodina. They are leading a Roma Church and a kindergarten. They recently started a new children's club in another building, but there is no heater there ....

Thanks to your donations Traveling Light is able to encourage and help them so they can buy (among other things) a good heater. Once the heater is in place, we'll show pictures!

Well, we have many reasons to be happy and thankful. We had a really nice winter fair, collected a good amount of money for our projects, talked with many people and we will make a group of kids really really happy! 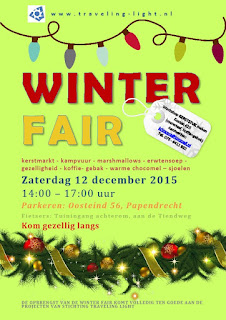 December is always a pleasant and busy month for Traveling Light. It is a time for thanksgiving, we look back on past projects and we plan for 2016. Next Saturday we are holding our first winter fair. A fundraiser for all our wonderful projects!

Project Christmas gifts for sailors is in full swing and for project lawn mower tractor for Teen Challenge in Serbia we have already received a considerable amount. We are almost there, but not quite yet :)

Thank you for your donations which enable us to support the many small and large projects in a very practical and direct way! We currently have more than 10 projects waiting in queue ... but let's not forget to look back.

Saturday November 14th the girls' home in Moldova was officially opened. What a beautiful place it has become. A safe place for girls and women who are being rescued from human trafficking.

Partly because of your donations this place is now a true home. Recently we received a number of specified gifts for the girls'home, so this week we were able to donate another 1,000 euros for the further furnishing of the house.

Also, we received photo's and a happy and thankful e-mail from Baranovichi, Belarus. The women's shelter is nearly finished. The rooms are furnished, there is a nice shower room and a communal living room.

The kitchen, which will also be used for the adjacent men's rehabilitation center and the homeless shelter, is also starting to look like something. They were able to acquire quite a few professional kitchen appliances, thanks to a donation we were able to send them in September.

Andrii Soloviov (the director of rehabilitation center Istochnick, near Sevastopol) is still working hard on his studies at the Moscow State University, writing his thesis. We are very proud of him!

We ask your prayers for Andrii and his family, mainly because he needs to undergo an operation on a tumor in his head. He needs to go to Novosibirsk, Siberia for this. Of course this will effect his study plans... at least for the time being. We feel we must share this with you all. Please pray for a good outcome!

Yes, we do receive serious e-mails like this one, and many happy messages, photos and newsletters as well. All showing that donations go much further than we dare to hope or expect ....

We are investing in people's lives, an investment that has eternal value!