They have a rehabilitation center (Betesda) in Jutland for men and women with addiction problems. In addition there are several coffee houses and street evangelism projects across the country as well as youth prevention work in Roskilde.

Denmark is, like the Netherlands, a rich western country, but that does not mean there are no problems. In Copenhagen, we were introduced to a growing number of homeless, drug addicts, prostitutes, refugees and displaced persons. Such pain in the streets ...

Allan & Pernilla Frederiksen work for Teen Challenge with an enthusiastic team of volunteers. Pernilla manages the 2nd-hand shop Cirkelines Æske, a successful store in children's clothing. The revenue goes towards the rehabilitation center, but also to Teen Challenge centers in other countries. Giving makes rich! 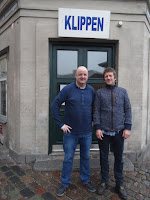 Allan hits the streets on certain weekdays with students and volunteers. They offer coffee and sandwiches to the homeless and drug addicts and have conversations with them. They often hand out invitations to coffee house Klippen. This is a place where they can come several times a week to warm up, eat and drink a cup of coffee.

After dinner there is time to sing a few songs and to listen to a short message from God's Word. Over the years many people have made the decision to go to the rehab center where they received hope for a new life and came to know the love of God.

It is not only financial support Traveling Light offers, but certainly also spiritual encouragement. It means we come to visit with encouraging words, we pray with people and we  listen to their stories.

Over the weekend we were guests at the annual volunteer party where Jan shared his testimony. We were also asked to share an encouraging message with the volunteers at Klippen. Jan went with Allan to the streets and on Monday night we were guests at the coffeehouse where we had interesting conversations with visitors and were able to pray with some of them.

Jan talked about John 3:17: God did not send his Son into the world to condemn it, but to save the world through him ... and as the Father sent Him, He sends us. How good to see that even in the darkest streets of Copenhagen God's love is revealed.

We furthermore visited a skate park in Roskilde. Teen Challenge has a meeting place in that location where some 60 young people come every week to chill and hang out together. Be Free is a fascinating project!

We believe that God has not forgotten Europe. We see His heart at work through people, in all countries, cities and neighborhoods. Everyone can join in by making a contribution towards that work. Donations are always welcome at IBAN: NL91RABO0118582275 BIC: RABONL2U St. Traveling Light in Papendrecht. Because of the connections and network we have, we can ensure that the money ends up for the designated project.

Project Cross and the switchblade Albania is still open, we have almost raised 3,000 euro.
Weissensee 2017 for Teen Challenge Georgia is also in full swing, we have already received more than 4,000 euro in pledges. Whether there will be any ice skating in the Netherlands this winter, we don't know. But what we do know is that thousands of brave Dutch skaters will travel to Austria for the 29th Weissensee event.

Our very own Traveling Light ice skating team is planning (after months of intensive training) to participate again this year.

Krijn Donk (Papendrecht) and Henk Swijnenburg (Bleskensgraaf) are aiming to finish the 200 km ice skating race, which will be held high in the Austrian mountains. And who knows ... maybe personal records will be broken.

But more importantly, they want to raise funds for the new Teen Challenge women's home in Batumi, Georgia which is currently being constructed. The house will be a shelter and rehabilitation center for women who are victims of human trafficking and/or are struggling with addictions.

At least 4,000 euro is needed to buy and install all windows and doors in the building! A few few months ago we were there for a visit, and we were so impressed with the work already done.

The new women's home is an idea and initiative of Doug & Anna Boyle who have been serving as missionaries in Kazakhstan and Georgia for years. Most of the construction work is being done by staff and students of the Teen Challenge men's rehabilitation center in the capital Tbilisi.

You can sponsor the skaters as as a team or individually as follows:
Of course all proceeds will go to this project in Georgia. You can send your pledges by email to (krijncora@kpnmail.nl) or Facebook.

We are in good contact with Kuanysh & Madina Akkuzov, the directors of Teen Challenge Georgia. They keep us informed about developments and needs. For the work among the drugs and alcohol addicted, the homeless and the prostitutes they depend on donations.

It would be awesome if the women's home could be opened as soon as possible, because the need is enormous. Will you help to make God's love visible to these women?

You can also donate right now by sending your gift to IBAN: NL91RABO0118582275 BIC: RABONL2U St. Traveling Light in Papendrecht. Make sure to mention WEISSENSEE.