We promised to give a final report on our Weissensee fundraiser 2019. Our ice skating team raised more than 8,600 euro for the expansion of the Teen Challenge rehabilitation home in Moldova! The home offers a Bible based program for men with life controlling problems.

It is the first time that such an incredible amount has been raised and we are very grateful for the support we received. On January 29th ice skaters Krijn Donk (Papendrecht), Henk Swijnenburg (Bleskensgraaf) and Henk Vlot (Oud Alblas) entered the 200 km tour on the Weissensee in Austria.

It was a freezing minus 16 degrees Celsius at the start and their water bottles were filled with ice, even the bananas were frozen. Snowfall had caused  many cracks in the ice and our skaters experienced quite a few falls

Henk Vlot broke his hand due to such a fall on the ice and he had to quit. Fortunately, and thanks to many prayers, he just received news that surgery is not necessary and when the doctors replaced the cast he told them everything about the fundraiser adventure.

Krijn Donk finished the 200 km in 7:41 hours, he finished in thirty-fourth place. Not bad at all, out of thousand participants! Henk Swijnenburg finished the tour without major injuries as well! Despite the fact that the men have not been able to break their personal records, they look back at a fantastic event and successful fundraiser. 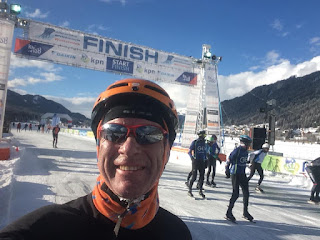 The skating team experienced an overwhelming response. Krijn entered the tour for the seventh time for Traveling Light. 'The amount that our sponsors have pledged this year is an absolute record', says Krijn, 'we are very grateful for all the positive comments!'

The amount will fully benefit the project in Moldova. The expansion of the existing teen Challenge men's home will consist of a second floor. Of course we will keep you informed on this blog.

We would like to thank everyone who has, in any way, contributed to this fundraiser. If you have not yet transferred your pledge, please do so as soon as possible at St. Traveling Light, Papendrecht, IBAN: NL91RABO0118582275, BIC: RABONL2U stating: WEISSENSEE.