Project Issacar in Rivoli (TO) Italy

Last month we visited the Italian translator of Marja's books. The congregation of which she is an active member, the Christian Evangelical Community Issacar just outside Torino in Northern Italy, has been providing shelter to the homeless and displaced for many years. Pastor Filippo & Emma Felice founded the church in 2003.

In 2009 they set up the non-profit organization Città delle Palme as a base for the practical and humanitarian aid they offer on a daily basis. Various rooms in the church are being used for preparing and distributing meals and shelter. 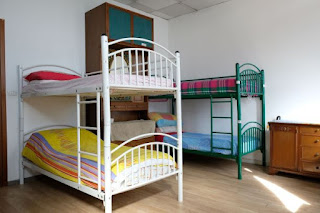 Besides beds and meals, pastoral help and support are being offered. At the moment the church houses around twenty people. Some of them have come to faith and have recently been baptized because of the love and practical help they received.

Because the current space became too small and impractical (and the number of people in need is increasing), they decided to build a separate facility next to the church. The land for this project was donated by the municipality of Rivoli!

With the help of volunteers and donations, a beautiful building is being built. Everything has been paid for so far, there are no debts. That in itself is commendable.
However, as a result of the current crisis, construction has been halted somewhat. Many people lost their jobs and income and no longer have the necessary finances available to complete this project. The church is now diligently looking for sponsors, because it would be nice if the roof could be in place before the winter!

In addition to the homeless, Città delle Palme also offers accommodation to students from Africa who often have no money to rent a room in Torino. Many of them study at one of the city's universities and because they are taken care of in the church, they become involved in everything that happens there.

Traveling Light would like to support this practical project. We have seen and heard how hard many in Northern Italy have been hit financially, economically, and physically and applaud Issacar's outreach to the lost, lonely, and homeless. The great thing is that they also have the support of a number of other churches in the area.

If you want to help,

The video below shows the construction project, so far.