Now that we have raised the 10,000 euro's (!) for Ukraine we will be introducing our next project. This doesn't mean the Onyfrievka project is a closed chapter, by no means! They are working out the official details and everything that comes with buying a house in Ukraine, so we will wait for the signal to transfer the money. Then, the real work can begin: renovation of the house. We'll keep you updated.
The next two projects we would like to support are a soup kitchen in Netanya and a home for abused women in Arad, both in Israel. We believe it is important for all Christians, as well as for Christian churches and organisations, to support Israel. God told Abraham (one of the patriarchs of Israel) that He would bless those who would bless Israel. Well, we all want to be blessed, right?! So, two projects in Israel it will be. Let's start by introducing the man behind the soup kitchen in Netanya: Brian Slater.

We met Brian a few years ago at a mission night in Jubilee Church in Camarillo, California. He presented a slide show and told the audience about his work in Israel. We felt an immediate connection with him and his work and we have been in contact ever since. Brian was born and raised in a Jewish family in Southern California and later moved to Israel where he met his wife Racheli. They have three children and Brian works through Chosen People Ministries (an American organisation). He manages soup kitchens and clothes distribution centers in Tel Aviv and Netanya, where he feeds hundreds of homeless, poor and lonely people (including Holocaust survivors) every week. He works with a team of volunteers who faithfully help him. We have been supporting him, not just financially, but also practically by translating his newsletters into the Dutch language and distributing them among his support group in Holland. We have visited him in 2008 and a year later, in 2009, Jan went to volunteer in his soup kitchen for a few days. 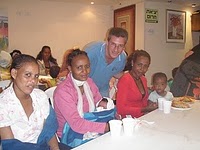 It is not allowed in Israel to evangelize in public, but behind the doors of the soup kitchen people can be prayed for or take books, bibles or flyers home. They also play worship music and show movies during the meals. In Israel it is as hard for Arabs as for Jewish people to live out their faith in the Messiah. They often experience persecution, criticism and sometimes exclusion from their families. Yet, the number of people confessing their faith in the Messiah (Jesus) is growing every day. Jan witnessed the reconciliation between Arab and Jew in person when he visited Netanya. Jesus is the only one who can bring real peace in people's hearts!
Brian just signed the papers for the rental of a store front building in the center of Netanya where they will open up a soup kitchen. we have asked him for a list of immediate necessities so we can purposefully start fundraising for this project. They are in need of tables, chairs, benches, curtains, coffee makers, banners and a wheel barrow as well as many other things. The most needed items can be purchased for about 3,000 euro's. So we will start all over again and try to come up with the needed funds as soon as possible. That way we will be able to bless the people in Israel and who knows we will be able to do much more in the near future. YES!
We are planning to visit Israel in October and we will certainly go and see Brian and hand him a helping hand in the new soup kitchen. You can click on the following link to see a slide show of the happenings in the soup kitchen in tel Aviv: http://www.youtube.com/watch?v=bp0Ta4ljAIU


For those in the USA who would like to give, please click on the below secure link to give a TAX DEDUCTIBLE gift and don't forget to designate your gift in the special designation box to: The Slater Family in Israel.
https://www.chosenpeople.com/main/index.php?option=com_dtdonate&task=authorizenetonce
OR
By Pay Pal
https://www.chosenpeople.com/main/index.php/donate/index.php?option=com_dtdonate&task=pre_paypal&Itemid=261
Posted by Traveling Light at 12:35 PM
Email ThisBlogThis!Share to TwitterShare to FacebookShare to Pinterest
Keywords Israel, Netanya, practical help, soup kitchen
Newer Post Older Post Home